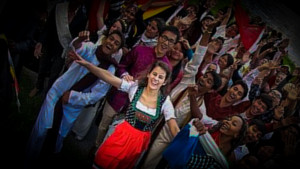 Almost exactly one year ago today, the new Austrian coalition government took up its work, including one Minister responsible for the broad portfolio of Climate Action, Environment, Energy, Mobility, Innovation and Technology. Widely labelled the “Super-Ministry” it is tasked with ensuring Austrian climate neutrality by 2040 – in other words, the transition to a decarbonised society and economy and thus climate-friendly future.

At that time, I was part of an agenda-setting initiative calling for more effective climate action from the government in Austria. This happened during my gap-year, after which I had planned to continue studying law. But with this new Minister I saw the opportunity for real change and so I considered myself incredibly lucky when I got the chance to join her cabinet, where I now work on climate and energy affairs as Junior Advisor to the Minister.

There is so much to do: in order to realise the goals of becoming climate neutral by 2040 and to use exclusively green electricity by 2030, we need to expand public transport as well as bike- and pedestrian infrastructure, overhaul the support scheme for renewables, improve energy efficiency, green the heating systems and realise an eco-social reform of the taxation system, attaching a price on climate-harming activities while reducing the tax burden on other factors such as labour. We also push the climate agenda in EU discussions and make meaningful contributions on the international level. In light of the effects of COVID-19, it is now essential that we build back better and greener, instead of going back to old and inadequate systems.

Had I not attended RCN, climate action might nonetheless have become an important part of my life. But RCN has given me two essential things which I’m convinced made a crucial difference. One aspect is the fact that RCN has brought the global effects of the climate crisis closer to home by giving faces to some of the countries that will be most affected by the crisis and reminding me time and time again of the urgency to address it. The other one being the courage to step up and give my best to make a positive impact, because what people of RCN have always shown me is that what matters in the end is the ability to see that something has to change and the willingness to contribute, to take responsibility. Just recently, talking to my co-year John, who is now working in the renewables-sector, has been another striking example of the many brilliant minds that are doing their best to make a peaceful and sustainable future work – inspiring me yet another time to keep my efforts going and convincing me that it is possible to realise the UWC mission. In this spirit I would like to encourage everyone to sit down with a cup of tea (keeping up a good RCN tradition) and read through the portraits of these wonderful people of RCN – there is so much to learn and inspiration to find when delving into this microcosm of stories, thoughts and experiences of this selection of dedicated, special humans.

If you’re working in the field of climate action or energy, hope to do so in the future or just share your thoughts, I’d be more than happy to hear from you!