The International Community taking a Stance against Wartime Sexual Violence. 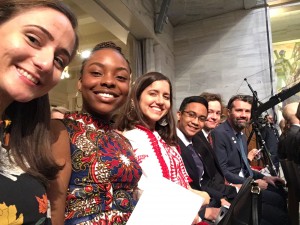 In Oslo City Hall for the ceremony

This year the College had the honour of being represented at the Nobel Peace Prize Awards in Oslo with the following students and staff attending: Jordanella (Sweden/Dem Rep of Congo), Olivia (Norway), Mariana (Mexico), Otto (Norway), Sidnie (Philippines) and Rektor Guðmundur (Iceland).

Our team gathered in the Icelandic embassy before the event, before heading to Oslo City Hall. In their speeches the two laureates called on the world to protect victims of wartime sexual violence – a brave and moving appeal for everyone listening. They were also invited to take an active part in the Al Jazeera interviews with the prize winners, Denis Mukwegea and Nadia Murad.

In this link (16:35-) you can see Jordanella, with her family background in the Democratic Republic of Congo, asking Dr Mukwege what we, as an international community, can do. 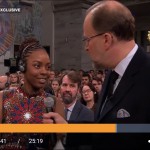 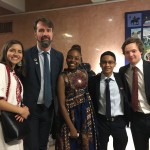 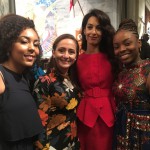