Over the past weekend, we had the privilege of attending the International Peace Conference hosted by UWC Maastricht in the Netherlands. Two students, one from Israel and one from Palestine, who realized the importance of peace through their experiences with each other after arriving at a UWC, originally put the conference into motion. After the original initiative, many other students were eager to join, ending with an international conference entirely organized by students. The conference lasted for three days, and it was an experience that neither of us will ever forget. 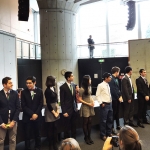 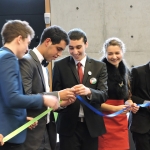 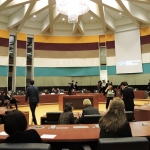 The conference kicked off at the beautiful government house in Maastricht, where we were able to listen to two amazing speakers. Their experiences, one as a war correspondent and the other as a former member of the United Nations, offered us a very diverse approach to the concept of peace. It was very motivating to be able to hear such realistic approaches to peace and the resolution of different conflicts in the world, and an overall excellent start to an excellent conference. On the second day, we participated in student run workshops, which allowed us to hear even more perspectives on the concept of peace in different cultural contexts. It was truly inspiring to listen to so many people our own age talking so passionately about peace from their own personal experiences, and even facilitating talks about possible conflict resolutions.

The peace conference ended at the University of Maastricht with one final speaker, who, aside from being a politician, was also a UWC alumna.  Listening to a politician speak on her personal experiences in the quest for peace offered another valuable perspective to the already diverse array of approaches to peace. One of the main highlights of the conference was the speech given by the two students from Israel and Palestine who originally began the conference, followed by the official opening of their initiative for a Palestinian-Israeli Youth Parliament. It really exemplified the underlying theme of the entire conference, which was the importance of dialogue between conflicting groups. Without an attempt at mutual understanding, the world will never achieve peace, so it is important the conversation is facilitated between any clashing groups. This conference really stimulated our personal desires to work toward a more peaceful world, and live our lives in such a way that will create a greater possibility for peace.  To this end, we will now begin preparing our own Peace Day/UWC Day activities which will be part of UWC RCN’s 20th anniversary celebrations on September 21, 2015.