Wednesday 27th of January was the start date this year. The PBL was something the First Aid Team had been looking forward to since the very first day they were accepted into the team. After three weeks of intense planning and preparation, the first years were gathered in the auditorium and, following the tradition, the course was opened with a simulation of a skiing accident. Sven Herman (Norway) went skiing down the stairs, crashing into a crowd of people. After ‘the casualties’ had been rescued and attended to by the first aiders, the first years received a short introduction to the Course’s content and the schedule of the following days, before they were divided into ten groups and guided to classrooms with their group leaders. 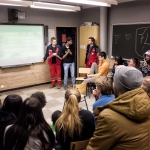 The quiz at end of Day 2 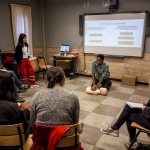 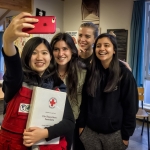 Satisfied instructors at the end of Day 2

The first day consisted of the basics of first aid led by group leaders, where they were introduced to the following: DR.ABC (look for Danger; does the casualty Respond, Stop and call for help, check Airways, Breathing and Circulation), CPR, calling for ambulance and body checks. This was first taught theoretically with illustrations, before the first years began to practise on each other – CPR was, of course, practised on CPR dolls and not on their breathing friends!

Following on from the first day, the second day went into more detail. Workshops showed different conditions with instruction on how to treat them. Some of the topics included were bleedings, hypothermia, epilepsy and burns. Each of the workshop leaders had come up with creative ways of teaching, including both scenarios and suitably gory make-up. The first years were eager and noted down all the information they were given. The day ended with a big quiz to test knowledge, followed by evening tutorials for the ones who wanted some further practice.

Friday was the third and last day, and was the day of examination. The first years started out with a written test in the auditorium, followed by a skills check in bandaging and CPR. The highlight of the day was probably the three big scenarios being arranged and acted out by the First Aid team: a car crash, a climbing accident and an exploded chemistry lab. Here, the first years (and even the First Aid team themselves) really got to feel the adrenalin pumping, as they were dealing with smaller or bigger amounts of fake blood, screaming casualties and smoke-filled rooms.

At the end there were about 100 tired first years, together with an exhausted, but highly satisfied, first aid team, walking back to student village.