Instead of going to school on the last day of classes, a large group of RCN students, teachers and volunteers, packed with big suitcases and backpacks for the summer, travelled with the Sogn og Fjordane Red Cross bus to Lom for the annual Norwegian Red Cross event, Til Topps. Galdhøpiggen is, with its 2,469 meters elevation, the highest mountain in Norway and with that the highest mountain in Scandinavia and Northern Europe.

After arriving and putting up the tents on Friday evening, there was a cultural show with a very nice atmosphere where people from all over Norway played many different kinds of music. One of our students was even recognised by a former Haugland patient who attended the EAC the student took part in during her stay at the Haugland Centre. Instead of going to bed after the show, the students found a nice beach next to the river and decided to make a bonfire –  it is light for a very long time in Norway at this time of year. And so the rest of the night was spent around a bonfire on the beach eating marshmallows with biscuits and Nugatti and oranges with brownie mix in them. 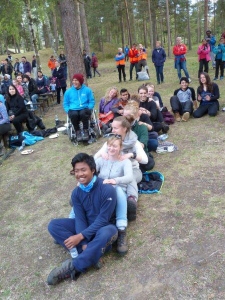 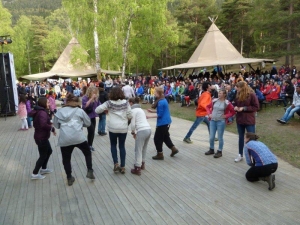 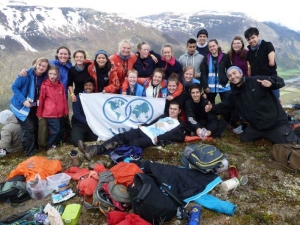 The weather forecast for Saturday was not good enough so the Red Cross decided to climb another mountain instead of Galdhøpiggen. The whole group of hikers numbered around 1400 and was divided into different groups. UWC students formed their own group, but were also invited to be leaders of some of the other groups and were given some responsibility to make sure everybody in the groups went up and came down the mountain safely. The hike was beautiful, the weather was better than expected and the leg gaiters and double layer of fleece sweaters were definitely not necessary. The view on the top of the mountain was stunning and the hike was the perfect opportunity to interact with the local Norwegians and with immigrants who had recently moved to Norway.