Sonam in the Viking Museum in Oslo

After finishing the intensive term from August to December, winter break is a reward for many students. Some can now eat the food they wanted to any time. Some can go back to meet their ‘long time no see’ family, relatives and friends. It is a complete break to leave all demands of school behind. Our story is of a group of 23 first years and 2 second years who stayed back in Norway during the winter break. The college had set up a special programme for those of us who couldn’t go home.

Oslo
Led by Narender and Ika, on the evening of December 9th, we took an over night bus to Oslo. Our first destination was the company DNVGL where we had participated in a conference on leadership with other students from all over Norway, through an organization called Young Ambassadors. Many of us took active part in the discussion and learned leadership skills. In the evening we were all picked up by our new host families. The next day we went to Hovseter Secondary School, where we shared experiences and made Christmas decorations with their students. In the afternoon, we went to the head office of the Norwegian Red Cross and SOS. The presentations from staff and volunteers  were excellent. On the last day we went to the Viking Ship and Kon Tiki museums.  We also decided to explore the famous Vigeland Park. It was a cultural shock for many to see so many naked sculptures,  but still everyone ended up taking pictures with these statues! 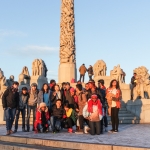 At the Vigeland Statue park in Olso 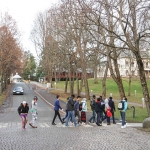 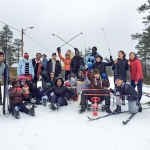 Fun in the snow for everyone!

Lillehammer  and the Nansen School
With its glorious Winter Olympic history, on December 13th Lillehammer welcomed us by covering itself with white snow. Some of the students could play in snow for the first time in their lives. We were also welcomed by three enthusiastic host students from the Nansen School, where we spent the next two days. We got the chance to listen to three extraordinary presentations on the Nansen Peace and Dialogue centre by a previous Rektor Inge Eidsvåg, and Bente Knagenhjelm. It was astonishing to hear about the efforts they have put into peace making through dialogue. Some of us managed to make close friends with the students there.

Back To College
On arrival back to our campus after a long bus journey, we were hungry but had not been forgotten. Arne Ophaug was waiting us in the Høegh Centre with warm food. Everyone was happy because they felt at home.  For the next few days we had a light schedule. We were all invited to Larry’s  house for an advance Christmas dinner and thanks to Larry, Edmund and Hildegunn the dinner was splendid. Our Secret Santas revealed themselves and we all received a gift. The cost of the gifts was sponsored by another friend of our college.

Langeland
After a few lazy days, we set off again for another adventure. From 20th until 23rd of December, we stayed in the cozy Red Cross cabin at Langeland near Førde. We originally went there to ski but there was hardly any snow. So, we went on a hike in the rain instead!  On the second day we tried a few hours of skiing on a patch of snow left behind at the ski stadium. Many picked up basic skiing skills and had lots of fun falling and sliding on the snow. Peter, the RCN chef, stayed with us and cooked lots of nice food to help us enjoy cabin life.

For the last part of our programme back on campus, we didn’t have a fixed schedule. Some of us went biking, hiking, walking, playing table tennis and playing a computer FIFA tournament. Due to Hildegunn’s efforts we all got host family during this period.

People say that when the time is good, it flies. We all felt the same when we realized it was the end of the winter program. Many of us think it was the best part of our UWC experience.  We are all deeply grateful to Naren, Larry, both Arnes – Ophaug and Osland, Kjetil, Hildegunn, Barbara, Ika, Peter and many more for making this program so successful. Thank you all!!