After the long summer break, the new term has begun.

The Summer Course was nearing the end of its 3-week programme at the College when second-years arrived in Oslo on 17th August for ‘Oslo Day’. Accommodation was generously provided by Berg videregånde skole, guides to take small groups of second-years around the city were arranged by the Norwegian National Committee, and a museum tour and food were given by Marianne Andresen. We were also very fortunate that Kåre Willoch, a former Prime Minister of Norway, took a group of students on a tour of the parliament buildings. Many thanks to all these for their generosity and kindness.

Kare Willoch, former Norwegian Prime Minister, gave a tour of the parliament to the second-year students

Returning to the College the students prepared for the arrival of their first-years. Simon Walker, a visiting speaker who had been giving workshops to staff, delivered a very well-received talk to the assmbled second-years about the challenges and opportunities that the coming year will bring and about the guiding role that they will have in helping the first-years adjust to life here.

That same night, with much whooping and hollering, the second-years greeted the first-year buses as they arrived in the early morning of the 20th August. It must have been very exciting and slightly terrifying!

Once here, after a few hours sleep, all students and staff were welcomed by Larry in the Auditorium. He gave an address that reminded us all to take care of each other – of the importance of compassion, conversation and companionship as we live, study and work together at the College. Read his address here. 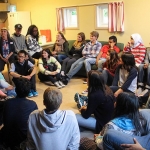 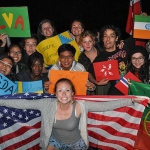 Ready to pounce – waiting for the first-years 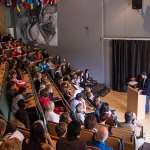 Larry giving the welcoming address to the whole College

The activities of Introduction Week began on Wednesday 21st: being taken on a tour of the campus with their new roommates; finalising academic subjects; having photographs taken for student cards; meeting with Advisors and House Intro WeekMentors; being introduced to the Leirskule activities they will be involved with during their time at the College (archery, canoeing, climbing, cultural sharing and more). The weather was kind for much of the week, and the sun shone as students played ‘getting-to’know-you’ games, particpated in inter-house competitions – including the inaugural football competition on the newly-completed Ballrink between student houses, staff from the College and Haugland Rehabilitation Centre.

Classes will begin on Wednesday 28th. We are all looking forward to the year ahead.

See a slideshow of images from the week