Karin Strand, once-upon-a-time a lawyer, now, and for the last ten years, an expedition leader on the polar exploration vessel the MV Fram, visited the College to talk about her work in the polar regions. The MV Fram, named after the expedition vessel of the great Norwegian explorer Fritjof Nansen, spends seven months of the year in the polar regions – half of the time in the Arctic, half of the time in the Antarctic.

She gave a vivid overview of Norwegian exploration of the poles over the last hundred years – talking about the adventures of Nansen, Otto Sverdrup and, of course, the remarkable Roald Amundsen. She quoted Amundsen who famously wrote in his 1912 book, ‘The South Pole’, that, “Victory awaits him who has everything in order — luck, people call it. Defeat is certain for him who has neglected to take the necessary precautions in time; this is called bad luck.” 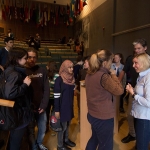 Talking with students and staff after the talk 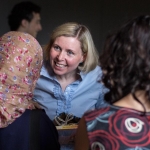 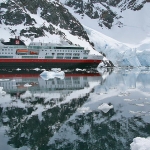 The MV Fram – the ship used to visit the polar regions

Karin’s work, while not necessarily involving victory and defeat, does require a certain amount of luck. In taking groups of visitors to inhospitable and inaccessible places plans are always needing to be adjusted, destinations altered and chances taken. She showed us film clips of the seal and penguin colonies in Antarctica, of dramatic seas in the far north and of kayaks moving towards astonishingly blue icebergs.

Questions from the audience? “What do I have to study to do what you do?!”

After the talk Arne Osland presented Karin with some gifts from the College and she kindly stayed behind to answer the many questions that students hadn’t been able to ask during the presentation.

Then, as she was leaving, Karin said, “Thank you for having me, it was truly inspirational for me to see this fantastic environment, you are doing the world more good than you know.”

Many thanks to Karin for coming to talk to us. For more information, click here, and here.