It was an honour to attend this year’s 11th Annual Conference of the SANMUN (Skagerak and Nesbru Model United Nations). This MUN happens to be the largest in Scandinavia – Norway through a joint cooperation with Skagerak International School and Nesbru vidergaende skole who organizes this event annually. Many schools from around Norway attend this event with some schools even flying from other Scandinavian countries to attend the conference, to work together in stimulating mind-opening debates and to explore lasting solutions to problems around the world.

From the 8th to the 9th of November 2014, three representatives from UWC RCN attended the conference representing the country of Australia at Nesbru School in Oslo. Members of the delegation were appointed to different committees to discuss issues of importance that are currently stirring debate around the world. This year the main geographic area of focus in each committee was Asia. Therefore the issues at hand included those of major concern regarding this continent – from  cyber warfare to an in-depth examination of the management of natural disasters. The sessions were long and tiring but proved to be very worthwhile. The debating was intense but resolutions were put across –  some were denied, some accepted  – and yet it was all leading to the best solution to the situations at hand.

The United Nations simulation is an insight into how the UN tackles issues affecting  different countries and regions of the world. It is a great opportunity for students to become delegates themselves and deal with the pressure of drafting a resolution that will pass whilst keeping in mind their countries’ interests. It is a stimulating event which, while resulting in exhaustion of the mind also requires maintaining a high level of alertness about what is happening around the world.

The delegation were excellent representatives of the College with Blessing Chirimbani getting the special mention of being the best speaker in the Environment Commission representing Australia.  Indeed the MUN for the RCN delegates of Australia was an educating and awesome experience. It was a chance to mingle with other students from the other parts of Scandinavia and it was definitely a fruitful experience.

We hosted our annual RCN Model United Nations from 1st-3rd February, including six guests from Bergen Katedralskole alongside all our first year students. The participants debated global issues similar to those discussed in the forums of the United Nations and were invited to join one of the five UN committees, or the Security Council and then spent three days trying to tackle various issues from the perspective of a UN delegate. Apart from discussion on global political issues, the conference also included activities such as day and night crisis simulations, a delegate dance and the formal dinner.

The Project Based Learning event was managed and organized almost entirely by the second-year students, who for more than six months have been working on the planning of this event. From the first training sessions in early autumn, first-year students enthusiastically took on the role of diplomats and political leaders, attending international conferences and debating issues. Students were encouraged to follow the strict procedures of RCN MUN – although there were the inevitable struggles to refer to themselves in the third person! Among the debated issues were environmental problems, human rights, peace negotiations, piracy, security and diplomacy. These important topics made the RCN MUN feel relevant. 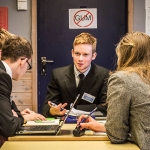 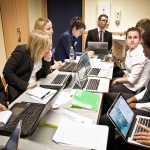 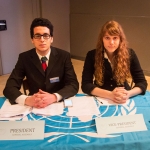 You will experience success, frustration, stress and excitement, but at the end of it all however, I hope each and every one of you will take away one simple thing. Inspiration. Inspiration to make a change and inspiration to be the change.

In many committees negotiations on such challenging topics were animated, starting early in the morning and continuing late into the night when delegates drafted their resolution. By using social media such as Tumblr and Facebook the RCN MUN 2014 journalists and photographers both helped and prevented the participants from developing and promoting their own solutions to pressing world problems.
On the third and final day of the RCN MUN 2014 conference, the delegates gathered in the General Assembly to present and vote on their solutions for the overarching global issues they were tasked with addressing. The General Assembly was closed with the best delegates being awarded for their performance.

First-year student Chantal Smeland from Norway had this to say:

I really liked the RCNMUN. Not only because we got a peek into the world of diplomacy and step into the shoes of ambassadors and diplomats, but also because through experience we learned  how one single nation’s decisions may affect national, regional and global politics, as well as learning more about the world today as we become an increasingly interdependent international community.

I believe the experience helped me learn how to implement my speaking skills and frame my understanding in a more efficient manner, as well as teaching me how many issues affect today’s society. I hope this will make me a more globally aware world citizen and motivate me to “be the change I wish to see in the world”

Further pictures can be found on the College facebook page here.