This author has not yet filled in any details.
So far Edmund Cluett has created 595 blog entries.

As part of our anniversary celebrations we received a visit by President of the Norwegian Red Cross, Robert Mood on Feb 4th – 5th. During the stay he got to learn about and experience the values-based activities that the institutions at Haugland offer in the fields of education and rehabilitation. What combines it all is a shared focus on the resourcefulness of the individual – or with the words of Kurt Hahn: “There is more in you than you think”.  In his address in the auditorium, Robert Mood emphasized what qualities the leaders of the future needs: Values, culture, collaboration and teamwork – indeed, what we are trying to nurture.

Giulio Regeni was born on the 15th of January 1988 in Fiumicello in north-east Italy. With a strong passion towards politics and human rights, Giulio applied to UWC and joined the UWC USA class of 2007. While studying at University he became a member of the UWC National Committee team in Italy. On 25th January 2016 he disappeared in Cairo (Egypt), where he was doing his PhD studies. His body was found a couple of days after, with evident signs of torture, in a ditch alongside the Cairo-Alexandria highway. Since that day of 2016, Giulio has become a symbol for the victims of forced disappearances around the world.

A group of students at UWC Red Cross Nordic organised the making of a video to raise awareness about Giulio’s story and to highlight the current situation of forced disappearances in many countries.  Since Giulio was a UWC alumnus they wanted to cooperate with the whole UWC movement, bringing together the efforts and passion of 10 UWC colleges. The result is this video made by UWC Red Cross Nordic with the collaboration of UWC Adriatic, UWC USA, UWC Costa Rica, Li Po Chun UWC of Hong Kong, UWC East Africa, UWC Atlantic College, UWC South East Asia, UWC Changshu China and UWC Dilijan.

Ghulam Ali Doulat was born in Afghanistan and raised in Pakistan. In 2001, his parents were forced to flee from their home country when the Taliban came to power in Afghanistan. Ghulam’s father was a solider in the defeated Afghan army so he had no choice but to escape from his country together with his wife and eight children. Ghulam is the ninth and youngest child. Celebrating his 18th birthday this year as a student of UWC Red Cross Nordic in Norway, Ghulam has a striking ability to see the best in any circumstances that come his way. In this spirit he considers being born and raised in Pakistan to an Afghani family as a start of process for recognising the values in diversity:

“I feel more at home in Karachi where I was born and raised. It is a very diverse town. I grew up listening to a variety of languages and dialects, knowing different cultures and looks of people. From an early age, I learned how to build bridges and to live with others in harmony. Growing up in this society sensitised me to differences. If we choose to work together towards a common goal rather than highlighting our differences, we can achieve so much together. Diversity adds colour and flavour to life and can be a source for peace to the mind and among individuals, societies and nations.”

Ghulam is still deeply concerned about the situation that forced his family to live in exile – the absence of peace in Afghanistan. He knows the misery that conflict and war bring to the lives of children, women and society at large. That is why he values peace so highly.

“Peace is freedom. Peace means that people can pursue their ambition of building a better future without major hindrances. Peace is a pre-condition for the development of a country.”

Ghulam is one of the five students that are going to take part in this year’s Nobel Peace Prize ceremony as representatives of UWC Red Cross Nordic. This year the award goes to the Ethiopian Prime Minister, Dr. Abiy Ahmed Ali for his important work to promote reconciliation, solidarity and social justice. As a student who came from a war-torn country, this resonates with Ghulam’s personal experience and his view of peace.

“There are many reasons why I am looking forward to attending the Nobel Peace Prize ceremony in Oslo. I am going there with the expectation to learn from the wisdom of a man who has managed to bring solutions to what has been an ongoing and serious conflict in his region. So I am eager to learn about what Prime Minster Abiy Ahmed Ali has to say about conflict resolution. Because I know it is not easy to bring two opposing sides into agreement from the story of my own country. Knowing this will help me in the future to contribute to building peace in Afghanistan.”

War is the exemplification of hell on earth for all involved. I know it, because I have been there and come back.

These were the words of the Nobel Peace Prize Winner, Dr. Abiy Ahmed Ali in his speech during the ceremony in Oslo City Hall today. It was an honour for our students Edda Iveland (Norway), Leane Ickes (Malaysia), Elin de Wall (Germany), Manuel Macedo Lamana (Uruguay) and Ghulam Ali Doulat (Afghanistan) to attend the ceremony together with our acting Rektor Jo Loiterton.

One of our students said, “It made an impact to hear the laureate talk about his personal background, and to learn he had been a soldier in war. He gave examples of how he was fighting the war, and it gave a less intellectual and more concrete understanding of peace.” 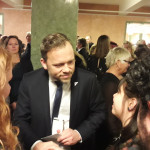 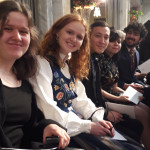 Inside the ceremony hall 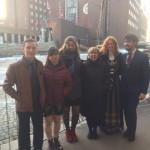 In the chilly Oslo air