A couple of weeks after grad, I started working on full time in Oslo in the national committee for Operation Day’s Work (ODW). I missed the fjord, my roommates and basically everything about RCN, but I think I am sort of used to live in a city now. In the committee we did a lot of fun work, but the best part was the visit from two young people from DR Congo. They both work in the mines close to their village, and they visited our summer camp to talk about their situation and help us create the ODW2019 campaign.

In December I was elected as the new leader of ODW, and 2nd of March the project for 2020 will be elected by Norwegian students. The work has already started, and it is very interesting, both to get more insight in ODW, the different networks that we are a part of (for example Global Campaign for Education) and to get real work experience. I am also responsible for the new national committee as they are all new to the work. It has been so nice to get to know them so far, and we are all very excited for the project, the seminars and all of the work.

Except of ODW I read and draw a lot, and try to not miss RCN too much.

Here is the Annual Report 2020 – with stories and images from major events of the past year, financial statement, and key figures.  Notice that most of the material is from before the COVID-19. The report is released for the upcoming Council Meeting on May 3rd.

50 international students still in Flekke, what are they doing? Norwegian news found their way to RCN. 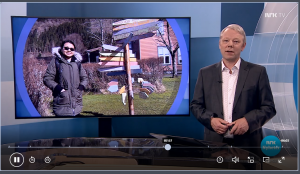 I graduated less than a year ago and I’ve already managed to get so many experiences in that time. In August I moved to a studio apartment in Oslo and start a bachelor in screenwriting and playwriting and quickly got a part time job at a concert venue. It was election-season in Norway, so on my spare time I visited schools and campaigned for my political party. I was also on my party’s list of candidates in my small hometown located in the western part of Norway, but I never expected to get into the city council. However, I did and it’s great. I’m learning so much and it is nice to have an excuse to go home and visit friends and family.

My plan was always to study law. I’ve been interested in politics all my life and most of the politicians around me studied law or something similar, like international relations, economics or maybe even psychology. Therefore, I assumed that was what I should do as well. However, if I then had to use my spare time doing politics, what would happen to all my other interest, like theatre and music. I’ve always had a huge interest in this, but I never considered making a career out of it or even study it until my last years of secondary education when I realized I actually hate doing homework and would rather spend my time playing music and doing theatre. I’ve also never really been much of an actor, so I knew I didn’t want to go to acting school. Therefore, I applied to a bachelor’s degree in screenwriting and playwriting and spent more time on the application than studying for my exams and it all worked out great.

One of my concerns was that I wouldn’t be taken seriously among my co-politicians because I would just have a fine arts degree. I can’t disprove this concern entirely yet because I’ve been doing this for less than a year, but my impression is that for non-politicians, I’m much more relatable because I can use a language they understand and I have the ability the imagine everyone’s point of view because I’m in theory is studying people, places and interactions which is a huge advantage, or at least I think it would be, let’s see what the future brings, weather I have a career in arts, politics or changes my mind and end up doing something completely different.