Boots were polished, kit was cleaned and the sun shone down on the eight teams who took part in the inaugural five-a-side football tournament on our newly-completed ballrink on Saturday 24th August. Each student house fielded a team as did the education staff, support staff and Haugland Rehabilitation Centre. Referees were impartial, play was fair, skills were mixed, there were spectacular goals – scored to rounds of cheers from the spectators – and no serious injuries! All in all, a great success. 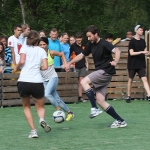 Rektor Larry going in – he was hard, but fair. 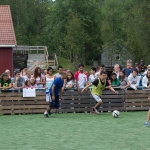 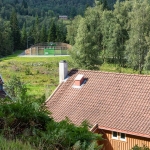 The overall winners of the hard-fought tournament were Iceland House with the only goal in the final being scored by Mario Midence from Honduras. Congratulations to all the players and to the organisers, referees and the refreshment crew. We look forward to other tournaments. Inter-IB Subject teams perhaps?

The students and staff are delighted to have this resource that will be used for play and exercise all year round.